Marley and I are a long way from being able to compete at a recognized event, but an opportunity came up this weekend to go cross country schooling with my trainer and a fellow boarder, and I was super nervous but excited to go. It seemed like a relatively low-stress first outing on the East Coast, and Marley has always loved XC so I figured he might actually enjoy our little excursion.

Our destination was a lovely facility about 45 minutes from our barn in Northern New Jersey. They have a conditioning track and large field with tons of XC jumps – and a super reasonable schooling fee. Win all around!

Marley was a little nervous when he first got on the trailer at our barn; I’m not sure how much of that was him being nervous and how much of it was my nerves transferring to him. It’s been nearly two years since I put him on a trailer to go anywhere except for rehab or a new barn, so I was definitely keyed up.

After an uneventful trip, we pulled up to the facility and set about tacking up next to the trailer. Major takeaway from the weekend: I need to work on Marley’s ground manners in new places. Everywhere we’ve gone in the past, we’ve had either a stall or cross-ties to tack up in, so this was an adjustment. To say he was googly-eyed would be an understatement – he kept himself under control very well, and overall I was so proud of him, but there was a lot of big-eyed, giraffe-necked prancing.

I contemplated lunging him before hopping on, but there were a bunch of people in the outdoor arena who seemed annoyed at the prospect of us taking up space to shake the sillies out – I also know from previous experience that while Marley can be tense and bouncy he doesn’t generally explode.

After a few warm-up laps we made our way up the conditioning track to the XC field. It was quite a climb and the view was gorgeous – kind of a nice reminder of what the East Coast has to offer. Marley was AMPED in a positive way – just marching along and so thrilled to be out in the world. Hilariously, he was the Big Bold Leader until we walked off the track and into the rather tall grass, at which point I could see his ears spinning and almost hear his little mind whirring – “WHAT IS THIS GREEN STUFF THERE IS SO MUCH OF IT”. Such a derp.

Before we started any real schooling, my trainer had the three of us do a full lap of the field, just getting a sense of the terrain and the environment. Marley was a total rockstar – still power-walking a bit and definitely turning his head to take it all in – but overall such a good pony.

Once we’d done a full circuit of the field, we schooled the water (nbd, according to Marley), and flatted for a bit. It was great practice to ride on more uneven ground and just practice keeping the horses forward and attentive.

Toward the end of our session we decided it was time to pop over a few small jumps. Marley was seriously perfect – I need to relax a bit and let him really move forward to the jumps, but the experience was very positive. I loved how happy Marley got as we started jumping – he just loves this and I hope we’re able to do a LOT more of it. If anything, my nerves were the limiting factor on this little adventure – I think our next outing should be even better. 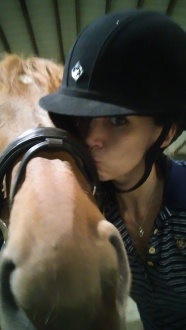 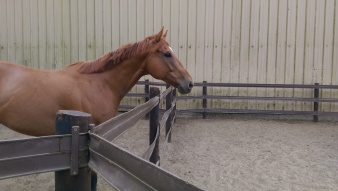 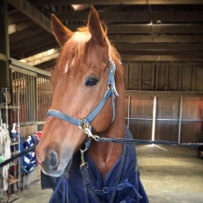 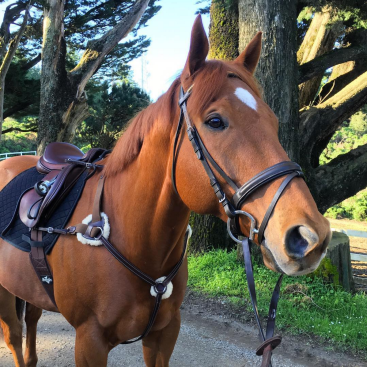